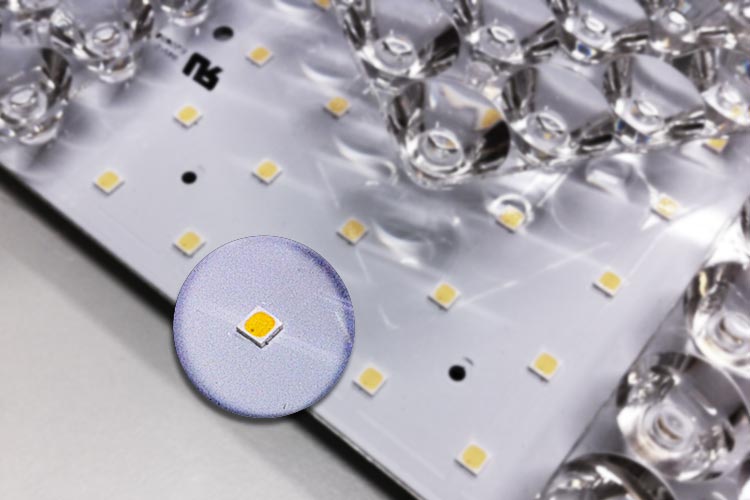 The Mid-Power LEDs: a solution with many advantages

The Mid-Power LEDs are massively used in all sectors of activity because they can be used for many purposes and present great advantages:

With Mid-Power LEDs the design of a system becomes easier as they produce less heat than High- Power LEDs in the same conditions of temperature and current.

The main challenge with Mid-Power LEDs lies in their small beam angle. In a first approximation, a solution would be to use the same optics such as those for High-Power LEDs. But, this is not viable for many reasons, such as colour aberrations, spatial distortions or mechanical problems.

MEODEX has developed a solution

However, after several experiments and years of development, MEODEX has reached a specific know-how in the use of Mid-Power LEDs in replacement of High-Power LEDs. According to the requirements of our clients, we can bring the Mid-Power LEDs associated to its optics to meet the technical needs and target price. Thus, we converted several of our customers to Mid-Power LEDs, especially in Building Lighting, Life Sciences and Industry.

Last but not least, Mid-Power LEDs are 3 to 10 times less expensive than High-Power LEDs, which adds to the key role they play within the Industry.

It’s for all these reasons that MEODEX puts the Mid-Power LEDs in the centre stage. Here, we believe that they can be integrated in more complex projects and used in more innovative and efficient ways because of their great versatility.

The transition to Mid-Power LEDs is tempting you? Feel free to ask our team to evaluate the feasibility of this transition for your new or existing projects!